Long Laker Gets A Big Job

by admin  |  No comments | People, Uncategorized

“Anne Harrington brings more than two decades of nonproliferation and threat reduction experience to this position and is the perfect choice to lead the world’s largest nonproliferation program,” said Administrator D’Agostino. “Her experience in government, non-profit and private sectors both domestically and internationally are tremendous assets in helping to implement the unprecedented nuclear security agenda President Obama outlined in his 2009 speech in Prague.”

Ms. Harrington most recently served as Director of the U.S. National Academy of Sciences Committee on International Security and Arms Control from 2005 to 2010. Prior to her service at the National Academy, Ms. Harrington served at the U.S. Department of State as an expert on nonproliferation and cooperative threat reduction, and was responsible for developing policy and implementing programs aimed at preventing the proliferation of weapons of mass destruction and missile expertise in Russia and Eurasia.

“I am honored that President Obama has given me the opportunity to lead NNSA’s nonproliferation programs and work with our international partners,” said Deputy Administrator Harrington. “I look forward to working with the talented and dedicated nuclear security professionals across our enterprise and around the world to keep the American people safe and secure.”

Ms. Harrington graduated with a bachelor’s of arts degree from St. Lawrence University, an M.A. from the University of Michigan, and an M.S. from the National Defense University National War College. She has two children, Meredith and Owen Lynch.

Established by Congress in 2000, NNSA is a semi-autonomous agency within the U.S. Department of Energy responsible for enhancing national security through the military application of nuclear science in the nation’s national security enterprise. NNSA maintains and enhances the safety, security, reliability, and performance of the U.S. nuclear weapons stockpile without nuclear testing; reduces the global danger from weapons of mass destruction; provides the U.S. Navy with safe and effective nuclear propulsion; and responds to nuclear and radiological emergencies in the U.S. and abroad.

3-4 Month Winter Season, as Low as $200 a week
Heated Garage or Barn Space Available for Snowmobiles!
Stop Packing! Stop Trailering! Save Gas! Leave your gear and sleds right here!
Arrive and Leave Whenever You Want All Winter!!
One or Two Bedroom Units Available
Right On the Trail (North Point Road)

by admin  |  No comments | Uncategorized

Here is one of the candidates running for governor.

And if you’d like to read more about the upcoming election or watch a wrap up on the debate and for a link to the 90 minute debate check this out from NY1.

The information in this post is not a reflection of any political opinion. No candidates are endorsed on this website. It is here for entertainment and education only.

You’ll have to cut and paste this link because I don’t have time to properly link it.

by admin  |  No comments | Uncategorized 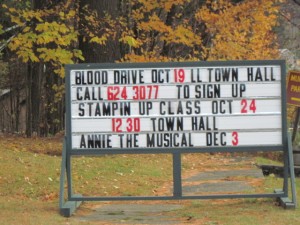 On October 19, 2010 the Long Lake Town Hall on Route 30 in Long Lake, NY was the site of the Red Cross Blood Drive sponsored by the Town of Long Lake and Long Lake Central School. Twenty seven were pre-registered, twelve walked in and forty-four donations were made. Students from Long Lake Central School including Jessica Pitcher, Eve Tobey and Melissa Clark volunteered their time after school at the Long Lake Town Office to rustle up donors. A partnership between the town and school has become an important component to the success of student community service and Melissa, Eve and Jessica were a huge asset.

Patty Farrell entertained donors at the snack table, Anna Pratt registered all appointments, Cindy Black commanded the coffee and seven nurses were on hand counseling. Many generous Long Laker’s baked cookies and made treats for the donors.

The goal was for forty pints and eight DRC donations.

What is a DRC? A double Red Cell Donor. Whole blood donations contain red blood cells, platelets, plasma and white blood cells. Red blood cells are the most frequently used blood component and are needed by almost every type of patient requiring transfusion. If you meet certain criteria, double red cell donation allows you to safely donate two units of red cells during one appointment as an automated donation process. It is as safe as whole blood donation.

Double red cell donation take about thirty minutes longer than a whole blood donation and you could donate approximately every four months.

The next Red Cross Blood Drive will be at Long Lake Central School on January 21st, 2011. The Spring collection will be on April 28th, 2011 at the Long Lake Town Hall. Our goal is to exceed our double red blood cell donations. 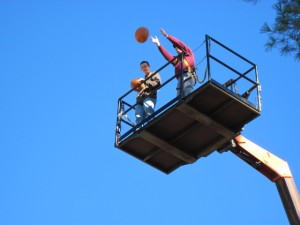 Judges for the Pumpkin Drop

Highway Superintendent, Chip Farr, and Canton college student, Erik Arsenault, were launched over 42 feet in the air to drop the pumpkins behind the Long Lake Town Hall on Route 30.

Halloween has arrived early in Long Lake. Sam and Jim Bateman have decorated their front lawn and porch with spooky ghoulish creatures, lights, pumpkin heads, spiders, and all things Halloween. Their home, located on route 28N in Long Lake, creates an impact at night surprising passers by with the orange glow from the decorations. Sam has witnessed cars driving by at full speed stop in their tracks and back up to check out her display.

When asked why she does it? Whether its Halloween, the Fourth of July or Christmas, Sam likes to have fun with whatever holiday she can. Check out her displays nightly at darkness until about 8:30pm. Their home is on Newcomb Road in Long Lake, about a mile from the intersection of Route 30 and 28N.

An Adirondack Affair on Oct 1,2 took fans of the soap opera genre behind the scenes. A panel discussion on Friday night tore apart the realities of the future of soaps and what could have prevented the downsizing of the industry. Panelists listed everything from the OJ Simpson trial as the first death knell to the internet and shrinking budgets and lack of corporate vision.

Saturday workshops included writing. Participants learned about the process of how a daytime drama script is conceived and written in a short window of time and 250 episodes of material have to scribed a year. Acting workshops saw Yvonne Perry ex-Rosanna from As The World Turns work scenes with aspiring actresses.

Martha Byrne worked on the 2nd workshop session and her students ran scenes with her from As The World Turns and All My Children. The classes were so small, each student really had an opportunity to work up close with our actresses.

The finale workshop with Ellen Dolan was yet another special treat. Ellen performed scenes playing all the characters of Lucinda, Lisa and Nancy Hughes. Ellen’s impersonations and line readings showcased her depth as an actress as well as her sense of humor and love of the genre. “Acting is playing” says Dolan.

Saturday night featured a VIP reception for special guests to meet everyone up close and personal and then a cabaret at the Town Hall in LL. Ellen Dolan opened up the show with a rendition of “What Will I Do” a goodbye to Scott Holmes, her TV husband for over 20 years. A strikingly emotional and beautiful vocal performance.

Martha Byrne rounded out the night with a number of songs she performed as Lily on As The World Turns, including “Carry Me With You,” a song she penned for her co-star Jon Hensley slash Holden Snyder. The song, featured here, “Need You Now” is performed by Byrne, local musicians Eric Peter, Yod Crewsy and Broadway rehearsal pianist Daniel Monteczuma (currently working the rehearsal circuit for “In the Heights”)

It was a great weekend for fans and for people interested in television production and the arts. We look forward to hosting this event again next year. A do-not miss event.

(excerpt from the Times Union)

LONG LAKE — When Alexandra Verner Roalsvig was a child of 8 in this Adirondack town, her family’s television got two stations, and they were both CBS affiliates. So she grew up watching “As the World Turns.”

Now, as director of tourism in Long Lake (population 850 year-round, 6,000-8,000 summers), she has organized a two-day event this weekend called “An Adirondack Affair.” A panel discussion tonight will address the question: What happened to our shows?

“Our shows” are soap operas, specifically “As the World Turns,” where Roalsvig worked for 17 years as production assistant before moving last year back to Long Lake, 130 miles north of Albany. She has invited five former colleagues — a writer, director and three “As the World Turns” actresses (two-time Emmy-award-winning Martha Byrne, Ellen Dolan and Yvonne Perry, who lives in the Capital Region) — to participate in a panel discussion, acting and writing workshops, and a cabaret performance. (See box.)

Much has changed since 1978, when Roalsvig began watching “As the World Turns.” Then, it was the most-watched daytime drama with 10 million viewers. Two weeks ago, it went off the air after 13,858 episodes. It debuted in 1956.

With the demise last year of “Guiding Light,” only six daytime soap operas are left, down from a peak of 19 in 1970. You can blame O.J. Simpson for that.

After Simpson’s murder trial in 1995 pre-empted daytime TV for months, ratings for soap operas never returned to their pre-trial numbers, says Fritz Brekeller, a director who has worked more than 20 years in soap operas, helped write histories of leading soaps and is conducting research for a documentary about soap operas.

“The Simpson trial was a real-life soap opera unfolding on TV,” says Brekeller, one of the participants at Long Lake. “By the time it ended, a lot of people who were in the habit of watching soaps discovered that they didn’t need to watch them as much anymore.”

They found other options for their daytime-drama fix. Simpson’s trial led to talk shows “jumping on the real-life bandwagon,” Brekeller says. “They began dealing with the same kind of stories that the daytime dramas were dealing with,”

In addition, the Lifetime network was gaining in popularity by airing shows geared to 18-to-49-year-old women, the demographic that had bolstered soaps for decades. More and more women went to work. More cable channels sprang up — then soap-inspired prime-time dramas such as “Peyton Place” and “Dallas,” then the Internet, then reality shows.

They all sucked viewers from the soaps. And as ratings declined, the soaps started downsizing, reducing casts, cutting salaries and compromising creativity.

“It really is all about downsizing in corporate America,” says Byrne, the award-winning actress who spent more than two decades on “As the World Turns.” “It involves a lot of different aspects of how the world is changing.

“Something that’s worked for 54 years, why is it gone? What changed, not just in the world and the genre, but what happened behind the scenes to affect those changes?”

She and Brekeller say TV executives made some bad choices that contributed to the soaps’ demise. They will talk about those with colleagues in the panel discussion and throughout “An Adirondack Affair.”

“We’re living in an age where people are just busier,” Brekeller says. “Everybody has to work. Everybody’s trying to balance so many responsibilities. I just don’t think people have the time anymore to commit to watching a show five days a week.”

Tom Keyser can be reached at 454-5448 or by e-mail at tkeyser@timesunion.com.

7 p.m. panel discussion: “What Happened to Our Shows?” (Participants: Actresses Ellen Dolan, Yvonne Perry and Martha Byrne from “As the World Turns,” writer Tom Casiello from “The Young and the Restless” and director Fritz Brekeller from “All My Children.”)

Admission: $15, $10 members of Adirondack Lakes Center of the Arts

Admission: $20 per session, $55 for three sessions

Location to be announced:

Admission: $15, $10 members of Adirondack Lakes Center of the Arts