Matt and Scott put a wall in place

Fitting with the theme of man against the elements, artists Matt Burnett and Scott Fuller arrived at Mt. Sabattis in Long Lake, NY in two pickup trucks with pre-made eight foot by eight foot wooden forms for the creation of the over- size, larger than humans, snow sculptures appearing in over three locations around Long Lake the week of January 14th through January 22nd. 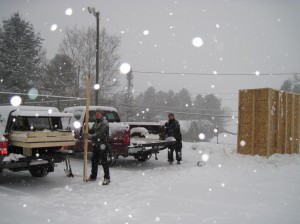 Matt and Scott unload the forms at 10am

Matt and Scott started the morning out in the snowstorm, which has dropped over six inches of snow and doesn’t seem to be letting up anytime soon. Prior to the storm Matt and Scott had projected that to get enough snow to fill the forms it would take hours to mold and set the forms, but with mother nature’s cooperation this latest storm continues to dump ample amounts of snow which makes the timeline of the project more feasible and more efficient.

Scott and Matt are using power tools, shovels, and propping up the wooden forms next to the Long Lake Town Flagpole, currently flying at half-mast as a mark of respect for the tragic shooting in Tuscon, Arizona.

The forms were constructed by Matt and Scott Tuesday evening at the maintenance workshop located at the Long Lake Camp for the Arts with the help of local volunteer, Richard Dechene.

During the project installation Matt and Scott will be working within the community drumming up volunteer support, and locating new areas to place their forms.  They will be calling on anyone and everyone to help them out during the installation.

To create the giant snow forms, the artists must fill the wooden boxes from the top using the piles of snow around Mt. Sabattis.  The LL Highway department has donated the use of a front loader and a crew member to help facilitate this portion of the project. Matt and Scott will tamp down the snow inside the box with snowshoes and shovels and pile an additional load of snow on the top as needed. The form will be in place with the packed down snow for several hours and once the form is safely set the sides will be removed and the form will be in place. It will take several hours to set the form, but the artists are thrilled with the snow that arrived today in Long Lake.

Look for the forms at Mt. Sabattis, at the corner of Route 28N/30 and Owl’s Head Lane (formerly Sagamore Road) and at the Long Lake Spillway across from the beach. They hope to land one more prominent location in the center of town to be announced later.

This project is made possible in part from support from the following organizations: The Arts Council for the Northern Adirondacks, New York State Foundation for the Arts, The Adirondack Museum, The Town of Long Lake, Union College, St. Lawrence University, Gillis Reality and with public funds from the New York State Council of the Arts Decentralization Regrant Program. In Hamilton County the Decentralization Program is administered by the Adirondack Lakes Center for the Arts in Blue Mountain Lake.

Long Lake celebrates winter in style the weekend of January 15th and 16th 2011 with the 10th Annual (or maybe 11th, the bean counters are checking) Winter Carnival on Saturday and the Vintage Snosled Races on Sunday, January 17th.

This year winter carnival kicks off at Noon with a celebratory Snowmobile Parade.  The idea emerged after last years winter carnival where the ideas flew from installing a chairlift to the top of Mt. Sabattis, inviting clowns, hiring a band, renting a tent and having a radio station broadcast live from the mountain.  Among the ideas included the concept of a snowmobile parade.

Starting at Noon snowmobiles will gather at the top of Mt. Sabattis in the parking lot of the Pavilion.  Participants will proceed in formation down the hill in a single line showcasing their sleds.  Once all the sleds and riders have gathered the Moonlighter’s will regale the crowd with the traditional  coronation of the King and the Queen of Winter Carnival.

Events including the popular Cardboard Sled Box Race, Golf, One-Shot Basketball, the Ladies Frying Pan Toss, Goalie’s Day Off and Broom Ball round out the day followed by a fantastical display of fireworks.  Warm your hands by the bonfire.  As nightfalls check out the illuminated human size snow sculptures around Mt. Sabattis, the Ball Field and the area by the Long Lake Town Beach featuring images of local Long Lake lore and celebrating winter.

The Little Bus will be shuttling residents and visitors around town starting at 6pm from the Geiger Arena Parking Lot to anywhere within Long Lake until 11pm.  Make your reservations, take your family out and have a great time.    We’re hoping visitors take in the nightlife at the Long Lake Diner, The Cellar or The Adirondack Hotel and we’re all about promoting safety, so please call if you need a ride.  Make calls to the Geiger Arena until 10pm.  After that the bus will shuttle around to area businesses to collect riders until 11pm.  Geiger Arena phone is 518.624.3031

Sunday boasts the Vintage Snosled Races at Jennings Park Pond.  Registration starts at 11am and the races commence at noon.  Check out local riders hitting the track.  Admission is $10 to benefit a local Long Lake Charity.

Special thanks to the Moonlighters, The Long Lake Lions Club and Jim and Paula Piraino for being instrumental in continuing to make this weekend one for the record books.  Think SNOW!

by admin  |  No comments | Adventures out of LL, Uncategorized

Thanks to all the readers and lovers of Long Lake! 2011 – Bring it on!

The stats helper monkeys at WordPress.com mulled over how this blog did in 2010, and here’s a high level summary of its overall blog health:

The average container ship can carry about 4,500 containers. This blog was viewed about 14,000 times in 2010. If each view were a shipping container, your blog would have filled about 3 fully loaded ships.

The busiest day of the year was November 7th with 321 views. The most popular post that day was Long Lake Summer 2010 World Premiere Video.

Where did they come from?

These are the posts and pages that got the most views in 2010.