by admin  |  No comments | Winter Recreation 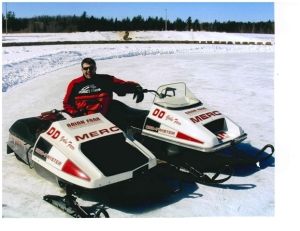 Feb 1, 2018 This post was originally published eight years ago! Hard to believe how fast time flies. Gabe doesn’t race anymore and he has TWO children. Gabe’s insights to the sport and his love of the event still shines through. Look for the next round of Vintage Snowsled Races sponsored by the Long Lake Lions Club on Saturday, February 3rd, 2018. Registration 8:30am, Hot Laps 10:30am, Racing at 11am. Admission for spectators $10. Kids under 16 are Free!

January 17, 2010 will mark the arrival of the Northern New York Vintage Snosled Races in Long Lake on Jennings Park Pond with races commencing at noon. The pond for your GPS can be entered as 1167 Main Street, Long Lake, NY

Gabe Farr, a native Long Laker, has been racing vintage sleds for over ten years and boasts several trophies and a few seasons back he garnered  title of Driver of the Year.  Gabe is married to his wife Kami and they have one child,  Griffin who Gabe hopes will eventually carry on the family tradition.  When not racing the circuit, Gabe works for the New York State Electric and Gas Company.

This year Gabe will travel to the World Championships in Eagle River, Wisconsin on January 6th.  His pit crew includes:  his father Brian Farr, in charge of motor and engine work and Johnny Walker, handler of fuel, antifreeze and suspensions.  He relies on the talents of his Dad and Johnny to pull him through the grueling schedule.  It is clearly a team effort and Gabe attributes his successes to the dedication of the entire group.

Gabe trains on Jennings Park Pond as soon as the ice is thick enough to plow and groom.  He races between eight and twelve times a year mainly on the Northern New York circuit.

Gabe admits his favorite place to sled is on the smaller tracks.  They may not be as fast, but do require more driver skill. The fastest he has ever been clocked was on a flooded track in Booneville at 76 mph, but his sleds are geared for up to 100mph.

Gabe races three of his four sleds in two classes for a total of six races in each competition.  There are three lap heats and five lap finals for each race.  Gabe states his training consists of practicing on the loop on the pond as often as possible which helps build his stamina and hones his skill.  This year Ryan Kitchen will ride one of Gabe’s sleds for his first time in the competitive circuit.

The Long Lake Lions Club works with the NNYVSR to bring the races to town, filling the long missed gap of the 100 Miler a notorious racing event from years past.  The Lions Club offers a variety of food and snacks from the Roach Coach.  Need a break from the cold, come on in, do some shopping and grab a bite at one of our local restaurants.

Gas, food, lodging, friendly folks are the earmark of Long Lake and we make no exception during the Vintage Races.  Please check # or www.vintageicesnowmobileracing.com for more information.

by admin  |  No comments | Snowmobile, Uncategorized 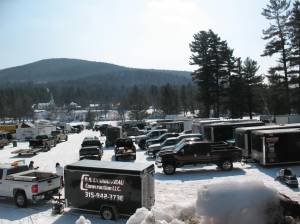 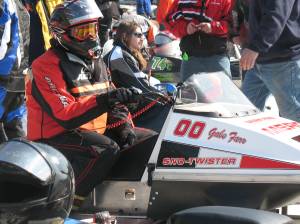 Bright beautiful and slushy describes Sunday, March 7th for the final day of the New York State Vintage Snosled races. Brian Farr vigilantly plowed the ice track for several days leading up to the final event, determined to make the track ride able. On Friday the pond boasted 20 inches of ice and according to the guide base on clear, blue, hard ice on no-running waters, that should hold about 25 tons. Of course slush ice is weaker and there was plenty of that as the day wore on.

A snowmobile race in Long Lake elicits winter memories of the 100 miler. The humming noise as the engine revs and the track spins, the smoky haze and familiar smell of snowmobile exhaust all tell a story of adrenaline, competition and passion for speed, the snowmobile race always revered as a Long Lake tradition. The ball field was crowded with trailers hailing from all over New York State. A roster of folks who have been traveling the winter circuit since the middle of January. 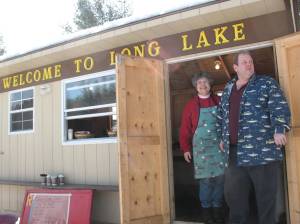 Phyllis and Bill Ryan were set up on the Town of Long Lake Roach Coach, grilling food, selling hot dogs and sodas for the Cybercreek Café. Pat Benton, Dick Farr, Ali Hamdan and Michelle Helms gathered at the base of the muddy road leading from the the Long Lake Central School parking lot onto the field collecting ten dollar entry fees. 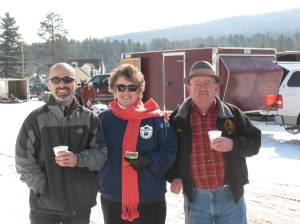 Pat Benton exclaiming “everyone pays, even if they are racing. It’s a fund raiser for the Lions Club. Everyone has been polite and kind and really pulled together for this event. We are all pleased to see such a great turn out.” Lew Plumley popped down on the field hauling hay bales and orange cones pleased to see a good turnout, exclaiming they had twenty five more racers than the previous race in January. Whispers around the sledding circles spoke of a racer in Warrensburgh who had been injured and one of the races was designated a fundraiser for him, but details were elusive.

Sleds were transported from the field to the ice with ATV’s driven by Devin Freeman and Gregg Wallace with flat plywood trailers to help keep the path from the field to the ice passable. Bleachers were set up overlooking the pond, but the action was on the ice. Over 225 people gathered, pit crews, racers, time keepers, and spectators all gathered to watch the slushiest race of the season. 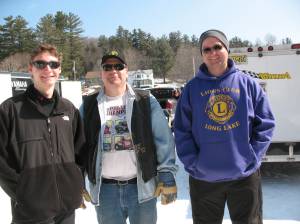 Catching up with Ryan Kitchen of Delmar, NY was a breath of fresh air. A junior in High School he exuded calmness and enthusiasm for his new sport. This is Ryan’s first season racing. His first season out of the gate was pretty successful. He hit the circuit in Booneville, Winthrop, Orangeburg as well as Long Lake. He took Home a 1st in Winthrop, a 2nd in Booneville and a 3rd in Long Lake. He rides on number 29 a Merc Trail Twister sled. Today’s race in the 340 Fan stock.

Ryan sported protective gear , covering his chest, knees, shoulders and his helmet. Ryan spoke of his race in Winthrop. “It was a very slushy track and I like to pass on the inside, but the track spins on the slush making it tough to pass on the outside” but he did it, taking home a 1st place win.

Brian Farr, Johnny Walker, Marty LaPlant are all ready acting as advisors, pit crew, and coaches. Gabe Farr, experienced rider, clues Ryan in about the track when he has time, gives hints to Ryan “Gabe tells me where to go, what to do, who not to be next to.“ At the starting line Ryan admits his thoughts go to “not getting cut off, not crashing and trying to pass on the outside” The fastest he’s been clocked this season was 60 mph in Booneville, but he anticipated hitting greater speeds on the Long Lake track this day as the crew changed gearing, making the sled go faster.

Spectators truly get their money’s worth watching the racers avoid crashing into each other and stretching their ham strings maximizing the G-forces as they round curve one. This final race demonstrated the confidence build as the season wore on. The race in January was plagued with a very slick and cold track and the racers were looser, sliding over the track, trying to get a handle on their sleds. This race exuded an air of confidence, racers hitting their stride as they round the corners, the weekends of racing providing lessons and experience that only gels with time.

It’s sad to say goodbye to winter, but we are also very pleased we had one and a great one at that. Our snowmobile trails are no longer being groomed and the ice is going out over outlets and running water and the channels are breaking up. Spring thaw came quickly. 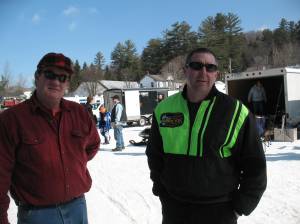 Brian Farr and Mike Ross Talk about the Track

A huge thank you to the Long Lake Lions Club for hosting a great day and to Mike Ross and the organizers of the New York State Vintage Snosled Races. Come out next year, make it a weekend, it is a great fun way to spend the day in Long Lake.

Congrats to Ryan Kitchen and Gabe Farr for an excellent season. 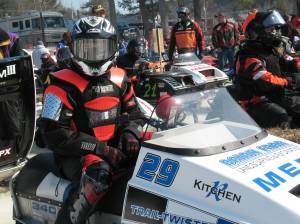 Ryan Kitchen on his Sled 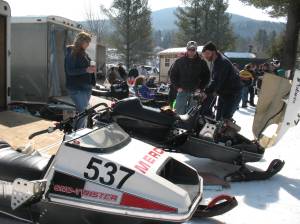 Sleds Prepping for Transport to Ice 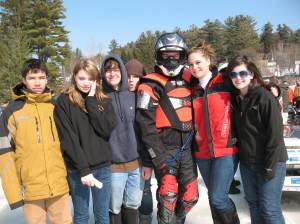 Ryan Kitchen (in the helmet) with his Fan Club