Have An Adirondack Affair

by admin  |  No comments | As The World Turns, Event News, Uncategorized 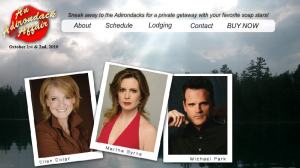 The Town of Long Lake and The Adirondack Lakes Center for the Arts are thrilled to announce their partnership for the sudsiest event of the season.

Sneak away to Long Lake for an unforgettable weekend October 1st and 2nd and have “An Adirondack Affair” with two time Emmy Award Winner, Martha Byrne, and Emmy-nominated Ellen Dolan (Margo Hughes, As The World Turns). Friday night join us for a panel discussion all about the why’s and how’s of Soap Operas. Hear the crazy stories about the daily routine, the backstage dirt and unveil the truth about what went wrong and why so many of our favorite “soaps” are disappearing. Saturday workshops include acting, directing and writing workshops with Emmy-winning writer Tom Casiello from the Young and the Restless, and Emmy-nominated Directing Talent Fritz Brekeller from All My Children. Enjoy one-on-one time with Soap Stars Martha and Ellen. Get to know the actors, hone your craft and make your dreams come true in a small town setting. Tickets are available at www.anadirondackaffair.com 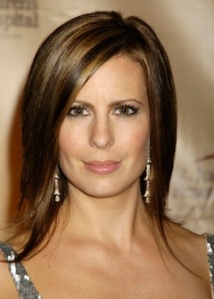 Martha Byrne is a two-time Daytime Emmy winning actress, producer and writer. She is best known for her more than two decade run on the CBS Daytime Drama AS THE WORLD TURNS where she portrayed the role of Lily Walsh Snyder, and later her twin Rose D’Angelo. Her award collection also includes numerous magazine awards and three National Viewer’s Voice Awards. Martha began her career at the age of ten with a two year run on the Broadway stage as July in the world renowned show “Annie.” Martha’s resume also includes over 30 television and film projects. Since leaving ATWT in March 2008, Martha has starred on GENERAL HOSPITAL, worked as a script writer on THE BOLD AND THE BEAUTIFUL, performed in a stage production of “Other People’s Money,” and was executive producer of the film, Bye Bye Sally, starring Malin Ackerman.

Ellen Dolan joined AS THE WORLD TURNS as policewoman Margo Hughes in November 1989, after having been asked to consider the part by the late Doug Marland, the head writer for the CBS daytime drama Dolan debuted as Bauer on GUIDING LIGHT in 1982, portraying the popular character for the next four years. Her additional television credits include the made-for-television movies “Mother’s Day,” “Mothers, Daughters and Lovers” with Helen Shaver and Claude Atkings, and “Dancing with Danger,” with Cheryl Ladd and Ed Marinaro. Her stage career began in 1980 at the Milwaukee Repertory Theater with roles such as Katrin in “Mother Courage.” Her subsequent roles in numerous regional productions have included Maggie in “Cat on a Hot Tin Roof” at the Virginia Stage Company, May in “How the Other Half Loves” at the Pennsylvania Stage Company, and Clelia in “The Nerd” at the Capitol Repertory in Albany, NY. She also started a theater company in New York called The Studio Three Group. Dolan earned her B.A. and M.F.A. degrees in theater from the University of Iowa in Iowa City. While working toward her bachelor’s degree, she spent a summer studying dramatic arts at the Webber Douglas Academy in London. Dolan was born in Monticello, Iowa and was raised in Decorah, Iowa. Now the longest-running actress by far to play Margo, Dolan continues to work regularly in local theater. For ticket and lodging information check out www.anadirondackaffair.com, www.mylonglake.com and www.adirondackarts.org.